We are writing on behalf of HIV providers, community-based organizations, public health practitioners, and people living with and at increased risk for HIV. We urge the U.S. Preventive Services Task Force (USPSTF) to quickly and efficiently evaluate long-acting cabotegravir, a long-acting injectable form of pre-exposure prophylaxis (PrEP), as part of your recommendation for the prevention of HIV.

PrEP is a unique preventive intervention both because of its safety and efficacy as well as the rapidity at which innovative PrEP products are coming to market. The current USPSTF recommendation for PrEP was released in 2019 (providing a Grade A recommendation for PrEP “with effective antiretroviral therapy to persons who are at high risk of HIV acquisition”).[1] At this time, only one administration route for PrEP had been approved by the Food and Drug Administration (FDA), an oral once daily pill-based antiretroviral (ARV) regimen. In the next six months, however, a long-acting injectable form of PrEP (long-acting cabotegravir) will likely be approved by the FDA. At the core of the federal Ending the HIV Epidemic initiative is an ambitious goal to drastically reduce new HIV transmission by 90 percent by 2030. Increasing the uptake of PrEP is a key component to ending HIV in the United States.

It is imperative that USPSTF recommendations reflect the current science and clinical practice guidelines so that providers are aware of these important innovations in the PrEP landscape and able to advise patients on the PrEP regimen that will be best for each patient. Ensuring providers are up-to-date on the latest clinical recommendations for PrEP is particularly important given the persistent gaps in providers aware of and willing to prescribe PrEP in the United States.[2]

PrEP is both an incredibly effective and woefully underutilized prevention intervention in the U.S. The two oral anti-retroviral (ARV) therapies approved for PrEP in the U.S.–emtricitabine/tenofovir disoproxil fumarate (FTC/TDF) and emtricitabine/tenofovir alafenamide (FTC/TAF)–are over 90 percent effective at preventing sexual transmission of HIV and over 70 percent effective at preventing HIV transmission among people who inject drugs.[3] At the same time only ~20 percent of people indicated for PrEP have actually been prescribed PrEP.[4]

There are also alarming demographic disparities in who is aware of and prescribed PrEP. Despite HIV incidence being significantly higher among Black and Hispanic gay and other men who have sex with men (MSM), white MSM are significantly more likely than Black and Hispanic MSM to report PrEP awareness, discussion with a health care provider, and use.[5] The most recent Centers for Disease Control and Prevention (CDC) data on PrEP utilization reflects these widening disparities. In 2019, 63% of White Americans recommended for PrEP received a prescription for the medications, compared to 14% of Latinx/Hispanic Americans and just 8% of Black Americans.[6]

New modalities of PrEP–including long-acting injectable formulations–have the potential to increase access to PrEP, particularly for individuals for whom adherence to a daily oral pill regimen is difficult.

Below are summaries of the two trials: 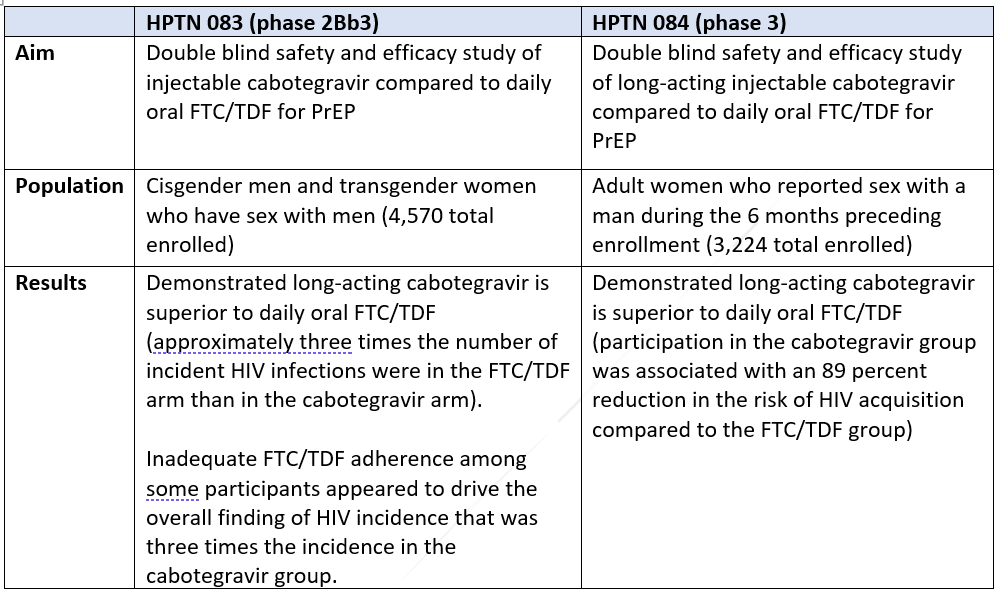 The CDC released updated draft PrEP guidelines in May 2021.[13] In that guidance the CDC included long-acting cabotegravir in light of the overwhelming evidence base for this modality and likely rapid FDA approval. The CDC updated the PrEP guidelines to include specific recommendations and clinical considerations for initiation of long-acting cabotegravir for PrEP, including recommended intervals for regular HIV testing, hepatitis testing, STD testing, and metabolic screening to ensure safe and effective use of the product.

USPSTF should similarly initiate an expedited review of this new PrEP formulation and update the current USPSTF recommendation for PrEP to include long-acting injectable products.

If you have any questions or comments, please contact Carl Schmid, HIV+Hepatitis Policy Institute, at cschmid@hivhep.org or (202) 462-3042.

[2] Kenneth H. Mayer, Allison Agwu, and David Malebranche, Barriers to the Wider Use of Pre-exposure Prophylaxis in the United States: A Narrative Review, Advances in Therapy, 37, pages 1778–1811 (2020),

[8] ViiV Healthcare, ViiV Healthcare initiates rolling submission of new drug application with US FDA for long-acting cabotegravir for prevention of HIV, May 4, 2021, available at https://viivhealthcare.com/en-gb/media/press-releases/2021/may/viiv-healthcare-initiates-rolling/.